Starting in summer 2015 the ‘Citizenship, Participation and Peaceful Coexistance’ is an incredible movement driven by a humanistic response by locals to a complex refugee crisis. 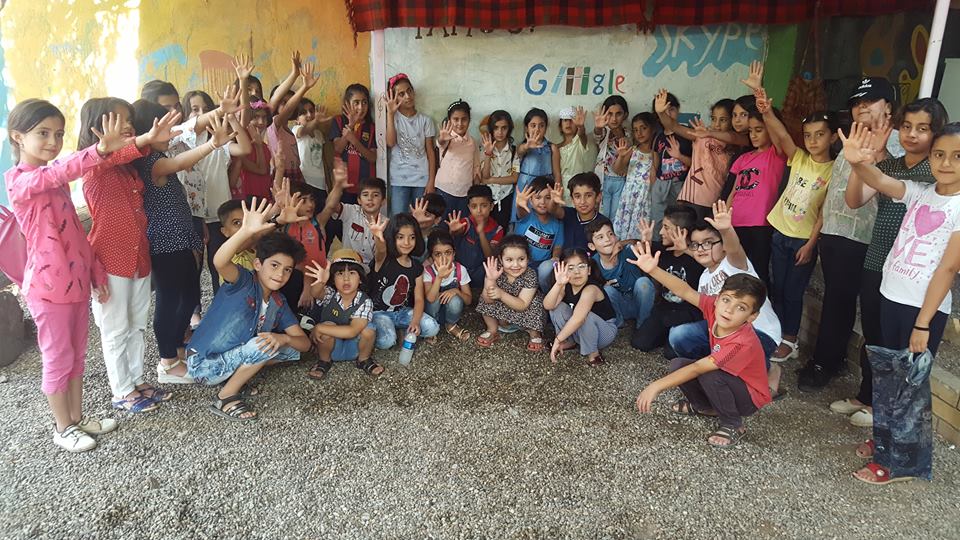 In 2018 our project continues to work to create an environment where all IDPs, Syrian refugees, and host communities of Halabja can coexist and live in peace.  This project offers participants different types cooperative activities to achieve life goals together, for example opening learning circles for 10 Arabs and 10 Kurds to teach each other Kurdish and Arabic. Over the summer of 2018 we have had the ‘Halabja Summer of Peace and Non Violence 2018’ campaign which has been a positive project where children and adults have come together to participate in music, art, yoga and english language courses. This campaign ties in with Wadi, our partner organization’s, ‘No to Violence‘ campaign which is working to end violence against children in schools and the home. That campaign is now part of our work, as we continue to promote mutual living, peaceful coexistence not just between refugees, locals and IDPs but also between adults and children, and in society.

Some of the highlights of the summer have been refugee, IDP and local children coming together for morning exercises before they begin their art, music or english classes. This  simple act puts the children in a happy mood and sets a good energy for the time spent together.

The refugee situation in Halabja continues to be complicated. While the Syrian (mainly Kurdish) refugees fleeing the civil war are mostly welcomed warmly, the Arabs who have arrived from central Iraq are met with suspicion. Currently Kurdish nationalism is strong and years of suppression under the Arab nationalist regime of Saddam Hussein have not been forgotten. Especially here, in Halabja,where during the Anfal campaign in 1988, the Kurdish population was targeted by sarin and mustard gas attacks, between 3,200 and 5,000 were killed or otherwise sustained lifelong injuries and illnesses.

Coming together, regardless of ethnicity, to help one another through this crisis.

Political analyses aside, the women at the Halabja Women’s Center understood perfectly well that politics should not be used against people. Many of the women at the center have been refugees themselves when they fled from Sadam Hussein’s Anfal campaign against the Kurds. Only by Syrians, Iraqis, Kurds and Arabs coming together would they be able to overcome this current crises and set a sign against rising racism.

In the Media: Rudaw: Halabja group launches ‘Summer of Peace’

In an inspiring turn of events in early summer 2015, about 100 women from Iraqi Kurdistan, Syrian Kurdistan, and Iraqi Arabs came together at the center to discuss the activities and programs that they could share. After much discussion, in an emotional turn of events it was decided that the program would serve Arabs and Kurds alike, regardless of which country they are from.

Through the “Campaign for Citizenship, Participation and Peaceful Coexistence”, the refugees are offering classes teaching Kurdish to the Arabs and Arabic to the Iraqi Kurds – Syrian Kurds were taught in Arabic and only in Arabic in schools under the regime of the Assads.

The idea and story behind the “Halabja Peace Project”  as it is often referred to, have been reported widely on Kurdish media, starting a public debate on how a welcoming culture for refugees could work.  The project has also shown what refugees can contribute to the city, through the regular cleaning activities that beautify shared spaces.

The educational activities that we offer through this project have all been suggested by the women themselves. They include: vocational courses such as sewing or hairstyling, language education, computer courses, arts and crafts for children. The social and environmental activities include: cleaning up local parks and green areas, coming together for public picnics, and general socializing creating a welcome atmosphere for refugees.

This project is supported by MISEREOR and Wadi.